Loss of pleasure, termed ‘anhedonia’, is one of the most debilitating aspects of depression. It empties life of many small pleasures like the joy of smelling freshly baked bread, the fun of catching up with an old friend, the warm feelings we get when we hug someone we love. Yet, despite how common anhedonia is and how much it interferes with the lives of the individuals it affects, we know very little about how best to treat this persistent symptom.

Research suggests that anhedonia may arise due to disruption in the way the brain processes pleasure and rewards. This disruption is thought to result from abnormal signalling in parts of the brain that are rich in dopamine (often termed “DA”), which is the neurotransmitter that elicits sensations of confidence and pleasure from stimulant drugs such as cocaine.

Our recent study, published in the journal Brain, tested the hypothesis that individuals with depression who show diminished responses to winning a monetary reward in a computer game, as well as disrupted dopamine firing and release in the ventral striatum (a region of the brain that is important for processing rewards), may respond best to a medication that increases dopamine function in this region.

To test this hypothesis, we recruited individuals with depression who had never taken antidepressant medication previously, and had them play a game that required learning through trial-and-error which of two shapes was associated with a higher chance of winning 20 cents. Participants had to try and win as much money as they could on the game. We measured the degree to which individuals biased their responding toward the higher value shape, and the strength of this bias was taken as evidence of their sensitivity to reward. We also measured participant’s brain activation (specifically, a brain signal known as a reward prediction error or “RPE”) while they performed a second reward-based game inside an MRI scanner. Finally, we measured dopamine release in the ventral striatum by scanning participants using PET imaging before and after they received an oral dose of amphetamine.

After the initial brain scans, participants were prescribed pramipexole – a medication commonly used to treat Parkinson’s disease and which increases (agonises) dopamine signalling in the striatum – for six weeks. We examined whether the participants who showed the lowest reward sensitivity, weakest reward-related brain activation, and lowest dopamine release, would improve most.

As we hypothesised, all three measures (reward learning, reward-related brain activation, dopamine release) predicted the rate at which symptoms improved over the course of treatment. However, in contrast to our initial predictions, the individuals with better reward learning, stronger reward-related brain activation, and more normative dopamine release, were those who responded the greatest (findings are summarised in the figure below). 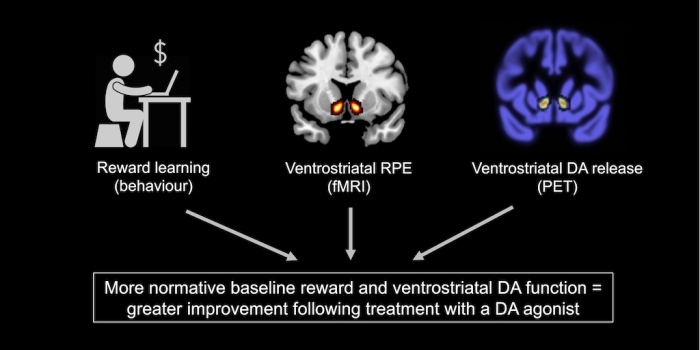 A critical next step in this line of research is to determine whether the depressed individuals with greater reward sensitivity and better dopamine functioning respond favourably to pramipexole specifically, or, whether they are more likely to respond to any treatment more generally.

Although the findings need to be replicated in future studies that use larger samples and a comparison with other non-dopaminergic medications (e.g., an SSRI and/or placebo), they suggest that imaging the brain’s reward system may lead to important insights that could improve the way we diagnose and treat depression.